I’ve been itching to build something but still have no real works space or power tools back yet after the fire.  So I bought some poster board and printed out the FT Flyer plans from FliteTest.com.  I had to cut the board on the floor or my bedroom but everything turned out well, it’s a very easy build and takes about an hour or two. The hardest part was making the firewall without any proper tools. I actually used a camping saw to cut it out.

After cutting out all the pieces I realized that the online plans mention nothing about landing gear.  The gear normally comes with the kit version and consists of disks of poster board that get glued together.  I knew there was no way I could cut perfect circles even if I had a jig so I went to plan B.  I swiped some film canisters from the camera store where I work and glued those together to make very serviceable wheels.  Some bent music wire served as the supports.

The other minor oversight on my part was that I failed to check my motor mount against the holes in the plans.  Thank god for zip ties! 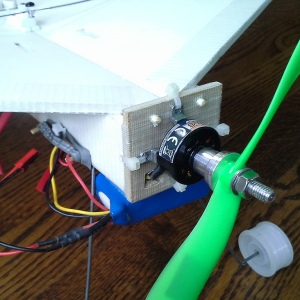 It flew OK but was too tail heavy and stalled like a teenager driving stick.

If you’re familiar with the FT Flyer, you will notice something different here.  After flying it around a couple times I decided three channel control was not gonna cut it so I decided to add ailerons.  I wanted to keep the weight down so I used only one servo.  Installing it was super simple but I only had two linkage stoppers so trimming out the ailerons was painful.  Rather than trimming each side or using the radio subtrims, I had to center the servo, disconnect the horn, trim the right aileron, reconnect the horn and trim the left side.

All that work paid off because it was much easier to control.  Although after making this I learned that it is perfectly ok to have just one aileron on only one side of the plane and it will fly fine!

Overall my version doesn’t fly very well.  I got the CG all wrong and tried to compensate by adding weights but the motor was underpowered and it was too unwieldy.  Without the weights I can get it to fly around but it is reminiscent of a fledgling duck.

This entry was posted in airFoiled, Builds, Mods. Bookmark the permalink.